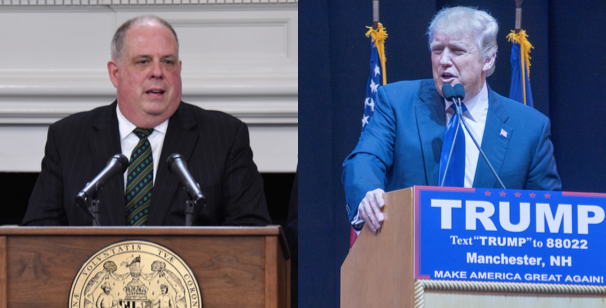 It appears as though Governor Hogan is continuing to share more and more in common with President Trump.  Hogan has said that his holiday gift to the people of Maryland would be a proposal that would return to taxpayers any revenue that lands in the state treasury as result of Congress curtailing the amount of state, local, and property taxes that can be deducted from federal income taxes.  There is only one problem with this — and as usual, Hogan forgets or willfully omits the devil in the details.

Those that have fought the Trump tax cuts since the original detail became public, showing the catastrophic impact they would have on Marylanders across the state have cried foul.  Those looking at the beleaguered state finances under the Hogan administration and tax collector Peter Franchot are arguing that any new revenue the state may gain from the new tax scheme will be sorely needed by the state to offer the impact of federal cuts to health care and other essential programs that Marylanders count on every day.  As Franchot has quietly lowered revenue expectations by millions of dollars, the state is need of cash more than ever.  Hogan is literally proposing to give the residents of Maryland money that does not really exist.

Hogan remarked, “Our goal will be to leave all that money in the pockets of hard-working Marylanders.”  Hogan is well aware of the shortfall making this comment even less believable based on simple math.    State Senator Rich Madaleno, vice chair of the Senate Budget and Taxation Committee and candidate for governor says he is concerned that Hogan’s proposal cheats Maryland.  The Democrat from Montgomery County has argued that the state is going to need every penny of that money to fend off the Trump agenda of cuts to Medicaid and supporting the health-care exchanges put in place in the Affordable Care Act.

Leaders of the Maryland General Assembly are taking another approach to protecting the people of Maryland from Donald Trump and the Republican-controlled Congress.  Early this week, Speaker Michael Busch and Senate President Miller discussed proposals by the legislature which would help Marylanders by untying some of the Maryland tax code from the federal tax code.  Democrats are working to push back against the federal tax measure that takes away $680 million in exemptions from Marylanders.  As tax season begins to start humming, Marylanders and accountants are struggling to understand the impact on their pocketbooks.  Hogan has done little to stay this anxious feeling by his constituents.  His silence for months has allowed the Trump tax cut to strike fear in residents all over.

While Hogan is busy trying to incentivize Amazon to do business in Maryland with a multi-billion dollar tax windfall, ordinary Marylanders are left pondering how the Trump tax haul will impact their families.  Hogan’s incentives to lure Amazon are regarded by many as historic – yet he has still not released any information on how he plans to combat his fellow Republican in the White House.  As Marylanders around the state are distressed over what might become of their bank accounts, many would appreciate Hogan spending some of that time trying as hard to spare Marylanders from the wrath of Trump and his Republican colleagues.  Hogan needs to take a stand against Trump and the Republicans and side with Marylanders who will be irrevocably hurt this tax cut for billionaires corporations.

Sellers and Perriello to speak at Politics & Policy Summit

Sen. Joanne Benson: Where is the compassion, concern for neighbor?