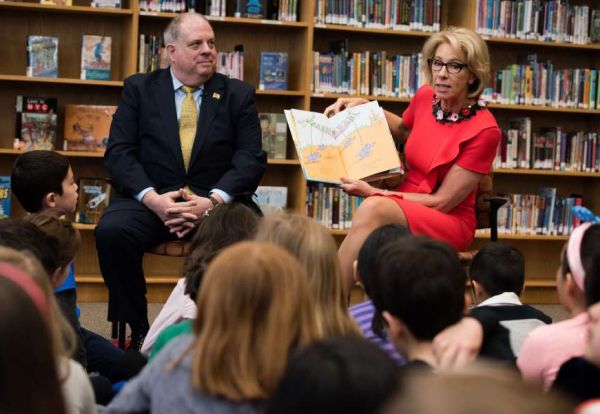 Governor Larry Hogan is taking another swipe at Maryland’s students. A couple week ago, Governor Hogan presented his operating budget for the next fiscal year of 2019. The governor said that none of his proposed cuts were serious and claimed that the budget will still fund the state’s priorities. However, Hogan has shown his priorities and they are not in the best interest of Maryland’s public school students. In fact, Maryland’s public schools have been underfunded by nearly $3 billion since Hogan took office, and this budget will only help continue that.

The proposed $17.7 billion budget includes a $5 million cut from afterschool programs and another $5 million from a mentorship and scholarship program. The budget also makes a $9 million cut from a teacher development and mentorship program. These cuts will result in larger classrooms and an increased student to teacher ratio. Larger classrooms make it harder for teachers to tailor to each student’s needs and learning styles. The cut could also affect the supply of teachers and school staff members. Recently, Maryland only hired 385 teachers while welcoming over 40,000 students.

The effects of Hogan’s proposed cuts will be endless as the amount of low-income students continues to rise. In less than 30 years, the number of Maryland students living in poverty has more than doubled and is currently at 45%. Furthermore, Maryland is currently one of the worst states for funding low-income and high-income areas evenly, as the lowest-income districts obtain 5% less funding than the highest-income districts. Although Governor Hogan doesn’t appear to acknowledge it, a study conducted in November 2017 found that the majority of Maryland residents wish to see this funding gap removed.

While the governor makes cuts to essential programs for Maryland students, he has put together a $5 Billion package to help attract Amazon to station their new headquarters in the state. Hogan has previously shown that he doesn’t prioritize the state’s education system through his attempts to cut funding for public education. Although his first budget proposal didn’t pass, Governor Hogan attempted to cut hundreds of millions of dollars from Maryland’s public schools throughout his term. In 2015, Hogan held back $68 million from schools following Maryland’s General Assembly passing a regulation that made Maryland fully fund GCEI. In 2016, Hogan cut $20 to education; in 2017, he lessened the funding for after-school programs, scholarships, and strategies for teacher retention by another $20 million.

It’s vital for Maryland’s legislators to oppose Governor Hogan’s continued efforts to neglect students and support accountability towards the funding of Maryland’s public schools. The Kirwan Commission, also known as the Commission on Innovation and Excellence in Education, was made in June of 2016 to review the education accountability measures and how Maryland school systems were spending their money. It’s vital for the excellence of Maryland public schools students, teachers, and greater communities that recommendations made by the Kirwan Commission’s are implemented.

Let’s talk immigration and American history, shall we?

[CHART] On the Issues: Governor Hogan vs. Ben Jealous

Jesse Colvin, a new kind of Democrat, wants to be your congressman