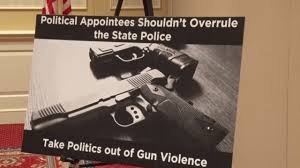 Maryland lawmakers are fighting for a safer state and more reliable handgun laws. Since Governor Larry Hogan took office, there has been an increase in the number of cases overturned by the Handgun Permit Review Board. Now, some lawmakers are looking to terminate the board that hears the appeals of residents who have been declined gun permits. Instead, they are seeking to leave such decisions with administrative law judges.

Lawmakers in support of the bill to eliminate the board don’t believe that such crucial decisions regarding the state’s safety should be left to a part-time panel. Furthermore, the selection of the panel remains controversial. The five members of the Handgun Permit Review Board are appointed by Governor Larry Hogan.

On the first day of the legislative session, the governor stated that he was removing the names of three appointees. While their nominations were withdrawn, the three members could still hold the position until a replacement is made for each position or the until the legislative session ends. Although Hogan announced that he was in the process of looking for replacements, this action could end with an even more controversial outcome. While board members are typically confirmed by the Senate, if Hogan fails to find replacements before the deadline in April, he may appoint a new board without Senate approval. Some lawmakers believe that this is strategic and that Hogan is trying to avoid the nomination process.

Maryland Senate President Thomas V. Mike Miller Jr. voiced his concern regarding the appointees at the Senate Executive Nominations Committee meeting. Miller announced at the meeting, which was during the current legislative session, that lawmakers will look into legislation that would decrease the power of the appointees who remain unconfirmed by the Senate. Other vocal supporters of the bill to eliminate the board include Sen.Richard Madaleno Jr. and Sen. Bill Ferguson.

Lawmakers have been fighting for securer handgun laws in the state for years. This is especially true following the Las Vegas shooting, which killed 58 people and wounded over 850. In addition to the termination of the Handgun Permit Review Board, lawmakers are also pushing to put an end to “bump stocks,” which was used in the Las Vegas shooting. Bump stocks, or bump fire stocks, aim to make semi-automatic firearms imitate the power of fully-automatic firearms and increase the risk of a mass shooting. Although a conclusion on either has yet to be made, it’s vital for Marylanders’ safety that the state’s leadership supports considerate and attentive legislature in regards to handguns.

Why Maryland Needs a Health Insurance Down Payment Plan